Interview With Jim Bruce 40 Years Of Passion Playing The Blues 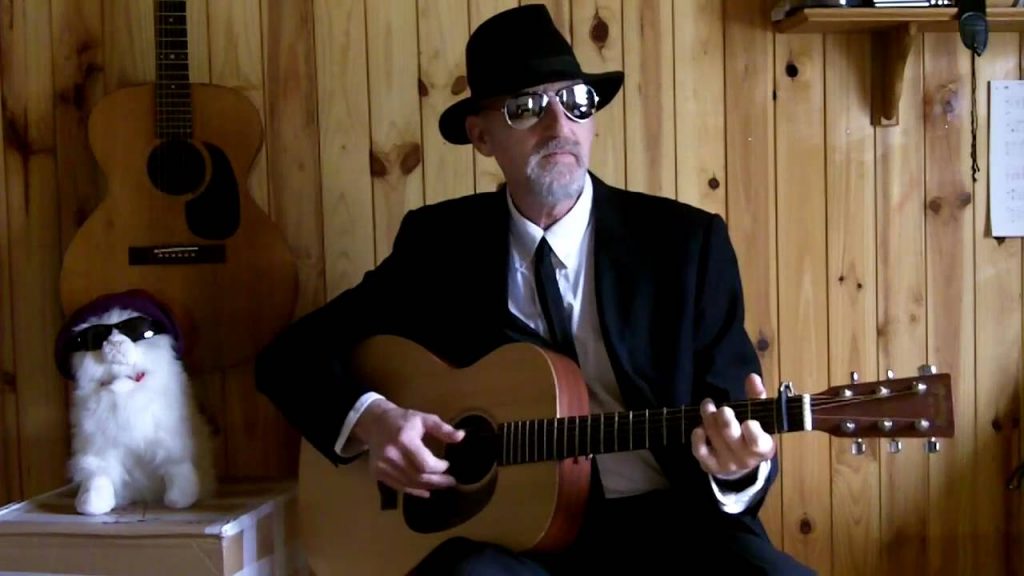 Here’s a treat for all the guitar players learning to play the blues. And a lesson in life if you’re feeling the blues yourself…

Jim Bruce started playing an old beat-up guitar 50 years ago after he happened upon hearing Bob Dylan coming over the radio. Anybody who’s into folk music will instantly know who Dylan is, he was an inspiration for many of the activists in their struggle to change the world order. However, for Jim Bruce, he was more of a wow factor, that put him on the road to over four decades of playing the blues.

In this revealing interview with Jim Bruce, he tells me of his own struggles, and what it takes to keep going when your whole world seems to be crumbling around you. If you’re a blues player yourself, you’ll most relate to Jim’s story. When you have a passion, you don’t drive the passion, the passion drives you.

Hi Jim, thanks for doing this interview it’s very much appreciated. 50 years playing the guitar is a lifetime, most people can’t see that far into the future and yesterday, well that’s about as far back into the past they want to look. It would be fantastic if you can give our readers some background on yourself.

No problem Steve – I’ll try and cast my mind back that far!

What got you started in the music industry and what attracted you to the blues?

Back in 1965, I heard Dylan on the radio singing Times They Are A Changin’, and I thought that one-man singing and playing the guitar was just about the coolest thing I’d ever heard of. I bought a beat-up old guitar and started to annoy everyone in the house for the next couple of years.

I was folk picking for 10 years or so – Dylan, Don McClean, Simon and Garfunkel (still love all that stuff) until one day, I heard an old guy in the back of a club playing something strange. I knew all the chords, but the way he was picking them was different. He told me it was ragtime blues, and I immediately changed course. I played ragtime for the next 10 or 15 years (I’m like that!)

I loved the challenge and the complexity of those syncopated sounds, thinking that the blues in E or A was just too easy. That is until I heard Lightning’ Hopkins.

He played just a couple of bass notes that made my spine tingle, and I realized I’d been wrong – the challenge of the old blues is to convey that feeling using the simplest of chords. These were true masters of the art, and I changed track again!

How’s the music industry treated you over the last four decades?

Gigging in bars and clubs was never my favorite thing, particularly before the smoking laws changed. I stopped playing for five years or so, and professionally I didn’t do a thing as I had a young family and priorities change, like it does for so many of us.

Sometimes it’s a disaster or a series of mini-disasters that also brings big changes in your life, and this is exactly what happened. I’ll cut the story short, but basically, at one time I found myself living in a tent, with no job, no wife and wondering what was going on! I passed through a city square in France and started to play. After I made enough, I went into a restaurant and bought a slap-up meal. I realized I could never starve playing the blues, so I started to build up my skill again.

I took a partner; a blues harp player made a couple of albums and moved around gigging. It was always tough – unless you’re a ‘name’ it’s really difficult to make a good living playing acoustic blues guitar; you’ve got to love it. The real change came when I started creating lessons. The aim was (and still is) to make this wonderful music accessible to all guitar players.

A lot of those blues styles of playing look difficult to commit to memory. Ever found yourself in a situation where you used your own improvisation to keep going?

There are common structures in any particular key, which can be adapted to playing about 90% of songs in that key. Often the challenge is to try to make them sound different and distinctive. It was a common problem with the old players – their songs in any one key were very similar. So it’s best to learn to play across several styles and keys.

I’ve found that improvisation comes when you know a style or song back to front and can play it in your sleep. Then you can explore without losing the flow. If you get lost within a song, then go back to the basic chord structure until you find your way again.

So apart from what seems like a full-time job teaching guitar. Do you still get time to play for the public and your fans?

Playing in public is getting less and less, mostly because I don’t need to, but I do it now and again to keep my hand in. Reverend Gary Davis once said if you’re not playing in front of people, you’re not really playing.

The other thing is that I find teaching so fascinating; it’s brought new life to my playing.

Coaching seems to come very natural to you. Was it always your intention to get into providing Blues Guitar Lesson?

No, it was never my intention. It started when someone asked me to slow down a technique, after a gig, just to see what was going on. First of all, I found it very difficult to slow it down, and secondly I realized I was doing much more than I thought with both hands.

At about the same time, I came across a YouTube video lesson teaching the blues, and I created a free Blind Blake lesson for fun. The reception was huge, and so I made more and more and started to put blues guitar courses together.

After a while, I was voted N°2 Top Internet Guitar Teacher by users of Truefire.com in 2013, and since then I’ve mostly focused on teaching.

So tell me more about your blues guitar lessons. What are your appreciations you have for your students?

The focus is firmly on the roots of acoustic blues, spanning many artists and all styles. My aim is to provide everything required to play this stuff, but not just make the sounds – I want students to play it properly just like it was. I also give tips on singing while playing, which is unusual in the genre. The lessons have a lot of detail and include just about everything I’ve learned in 50 years of playing.

Your Blues Guitar From Texas to The Delta Lessons would you recommend the course to a total guitar beginner?

Although the material is extensive and span’s relatively easy tunes in E and A to complex ragtime techniques, I wouldn’t recommend it at all to a complete beginner. The best candidate for this course will have been playing for a couple of years, and be proficient in basic finger picking. For example, a folk picker wanting to branch out into the blues would benefit greatly from the course.

Do you have any plans for an absolute beginner’s blues guitar lessons?

Not at the moment, but I am going to put out some folk picking lessons, such as Bob Dylan’s early work. That said, I know that good tuition at the beginner level is really important – bad habits developed here can severely limit progress later in a guitarist’s career.

It started off with nine lessons I believe, and now it’s up to forty lessons. Is this just going to be the norm adding lessons and more value for your students?

Great idea, but I’m going to leave this course as it is. If I produce more lessons in different styles, I’ll offer them separately.

Any inspiration, secrets or tips you want to give to blues players out there.

Always remember that finger picking consists of just three movements – thumb strike, finger strike or a pinch of both thumb and finger – that’s it! With that in mind, if you have the right tuition, and you can carry out the techniques very slowly, then you will learn. Anyone can play good guitar with the right lessons.

Of course, your expertise is going to be directly related to your practice time, as picking is a muscle memory process – the more you do it, the quicker your muscles memorize the moves.

Apart from that, you’ve got to absolutely love making the music and be determined to play the best you can. When you’re not playing, visualize yourself playing, while you’re at work, before you go to sleep – try and dream about it! This visualization technique is one on the secrets of the great players. See the chords, see and feel your fingers moving fluently around the strings and hear yourself making wonderful music, and you’ll be amazed at your progress.

Some great tips there Jim, it’s an eye-opener to interview someone who’s lived and is until this day still living the passion for blues music.

You can get Jim’s Blues Guitar lessons – From Texas to The Delta at a discount following the link, Or if you want to know more about Jim’s acoustic blues lessons you can read my Texas to the Delta blues guitar lessons review